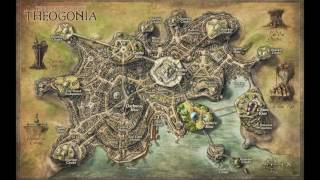 Erevos was created by a group of people running different gaming systems for more than 20 years. Endless amounts of plots and hooks, stories that were pursued and others that were abandoned. Hundreds of characters survived, some became Kings; others met a glorious death; others are still reported missing. Their stories created Erevos, giving birth to this living world. The vast majority of Erevos history and mythology has been weaved slowly through the actions of its players.

Cities such as Theogonia

have been created by the players of Erevos.

A brief history of the world:

Erevos is what remains of the now almost entirely devoured by darkness continent of Chthon, a land with a more than 5000 years old recorded history. Years filled with intrigue and warfare, rise of new kingdoms and downfall of old empires. A century ago a terrible event took place that shocked the balance of Chthon. A city floated around the lands rising the dead and controlling them into war against the living. Most Chthon kingdoms allied to deal with the upcoming terror, which proved to be a diversion from real danger. Powerful wizards had united and created a brand new school of magic, a magic that was fueled by darkness. Hence a dark veil covered Chthon and the Darkshed took place. Night magic was created.

Those wizards, now known as Dark Lords, used this new magic school to create monstrosities of unimaginative proportions. Mythical beasts created with the infusion of dankness. Darklings and Ekaths, the former an unholy bounding of all kinds of monsters with darkness and the latter near divine magnitude entities. The result of Darkshed was Chthon to be covered by eternal darkness and negative energies, while a little corner of the map was saved by the darkness when countless mages were sacrificed and created a a barrier against dankness, the river of Souls. This corner is now Erevos, with only river standing in between of eternal darkness and destruction.

This site uses Akismet to reduce spam. Learn how your comment data is processed.